In January, 2015, Mariellen Jacobs was in a place no mother wants to be…at her child’s bedside as he’s fighting for life.

Her son Clark, a second-year mechanical engineering student, had been asleep in his fraternity house when he fell from his loft bed to the floor. He crawled back up into his bed and went back to sleep. But when Clark woke up in the morning, he was nauseous, his neck was stiff and he had a headache.

His parents took him to the ER where a CT scan found Clark had a fracture at the base of his skull. He underwent emergency brain surgery to repair bleeding, suffered a stroke and spent the next few months in a coma, fighting for his life, while also battling infections and blood clots.

Mariellen remembers. She remembers watching her sweet son barely clinging to life. She also remembers thinking this horrible accident was preventable with a simple bed rail. So she started researching.

“I kept doing research online and seeing this number: 36,000,” Mariellen recalls. “That’s how many kids per year are injured in bunk and loft beds. These are largely preventable injuries that are bad enough for them to go to the ER, kids of all ages. But there’s a big spike between the ages of 18 and 21 – the prime college years.”

Mariellen wanted to make something positive come out of Clark’s accident and formed Rail Against the Danger, a non-profit organization with one mission in mind: to see rails on every loft bed on campus.

It is an honor to introduce you to today’s #RealLifeWonderWoman, Mariellen Jacobs!

KR: As a mom, I can only imagine how hard it was to watch your sweet child go through such a traumatic and life threatening ordeal. What kept you going? How did you stay positive through the long months (okay, years) of recovery?

MJ: It’s hard to even formulate a word, much less a sentence that accurately describes the hell of almost losing your child. When people ask me “how did you make it through that horrible time?” all I can really say is one word. Love. I think most parents have an almost supernatural, crazy love of their kids. We have two children and I would throw myself in front of a bus for either one of them. They are truly, like the old expression says, my heart beating outside my body.

Clark’s recovery has been a very long, difficult road. He literally almost died during brain surgery. Then he was in a coma for 10 weeks, fighting infections, numerous blood clots, and C-diff. After he started to emerge and come back to us slowly, he had to learn every basic life skill all over again. Swallowing, eating, talking, walking, using the bathroom. It was like having a 20-year-old infant. But truly through it all we were absolutely surrounded by love and covered in prayer by those around us. We had meals for 4 MONTHS. That’s the kind of friends we have. Amazing grace, no??

KR: How is Clark doing today?

MJ: Clark is living his life and that is something we are truly grateful for. No one comes back 100% from brain injury and stroke. He will have deficits the rest of his life but he is such a hard worker and an amazingly positive person. He lives up to his nickname, Superman! I can tell you that honestly, during 20 months of grueling therapy, I think I heard him complain 3 times. He just focused on the goal of getting his life back and going back to Georgia Tech. He had an intense drive to get better. There was just zero “quit” in this kid. His main challenges are extreme fatigue and short term memory loss. He compensates for them as best he can but it is a struggle with the difficult curriculum of a Mechanical Engineering major at GT. He may also limp the rest of his life as he has left side weakness from the stroke.

KR: Mariellen, you are truly a real life Wonder Woman. You work every day for greater good, trying to educate and protect our college students. What have been your greatest challenges and your greatest successes as you spread the word about safety and bed rails?

MJ: In the days following Clark’s fall, I began to wonder how prevalent this kind of injury was on college campuses. I found there were way more questions and very few answers. I began to do research on the internet and the number 36,000 kept coming up in various studies and articles.

That number represents ER visits every single year from kids 4-21 that report with injuries from bunk and loft beds. It shocked me and lit a fire in me that I am not sure I can even explain. I guess as we walked through hell, it became clear that something needed to be done. I know as a believer in God that He can work so much good out of something so awful. I didn’t want one more family to experience what ours had, so I started RAD. I’m a graphic designer by trade, so one day at home I designed an informational flyer with the headline, “Are YOU Safe?” I added statistics and started blasting it out on Facebook and social media. 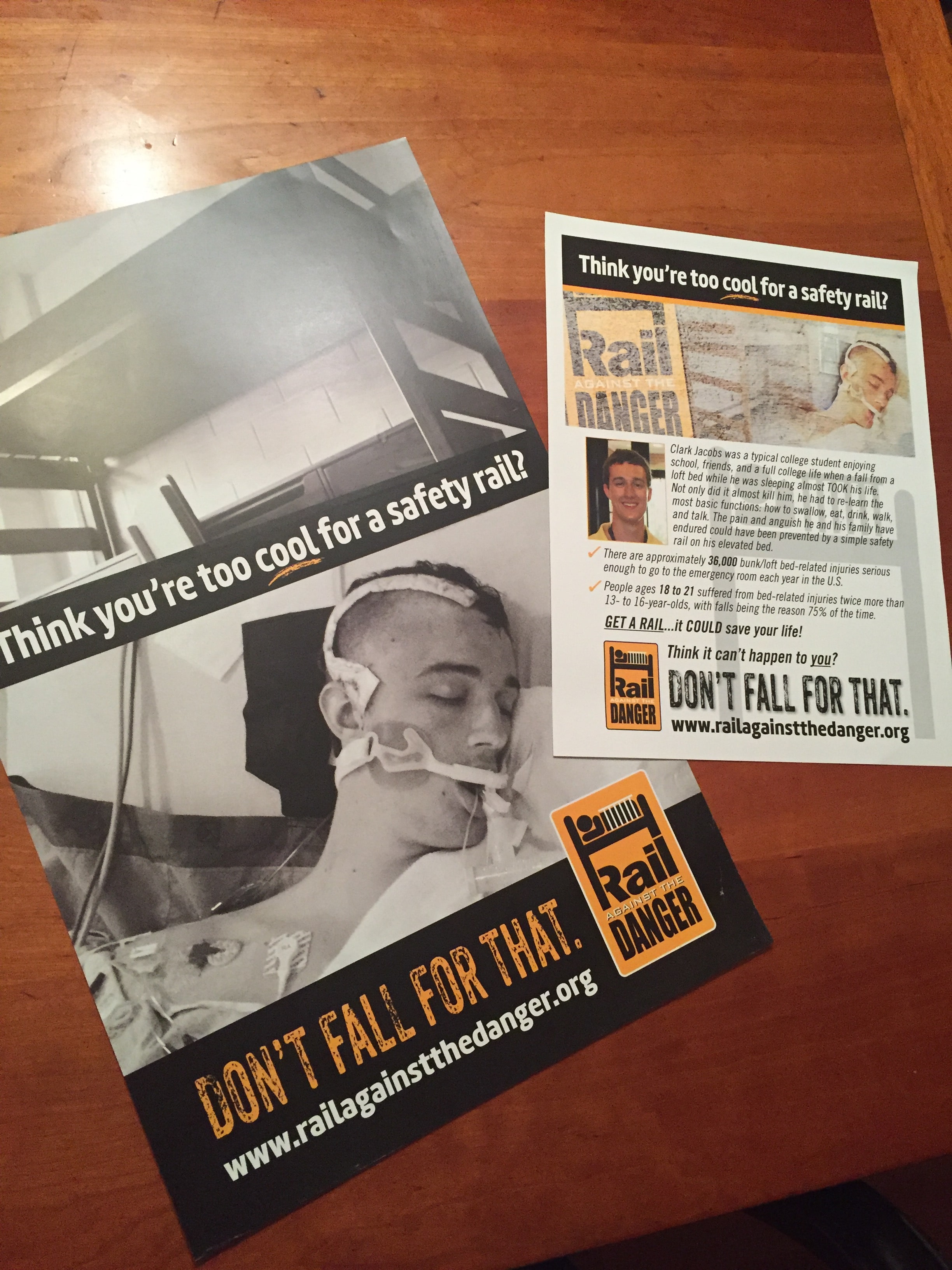 I think the greatest challenge has been bringing this “under the radar” issue out into the light. I have been blessed with so many people in my universe who were able to hook me up with the right people to get things going. When I met with the University System of Georgia (the entity that supervises all 28 public colleges and universities in our state) the first time in November of 2015, I was able to show the USG that there was no cohesive policy to offer and support the use of safety rails on bunk and loft beds. They weren’t yet ready to mandate rails be on the bed, but they did ensure that every single college would have to have them available on campus.

I wasn’t thrilled with that, but it was a start. In my opinion, colleges and universities have shirked responsibility for this for far too long. If they are charging parents and students for an inherently dangerous product, shouldn’t they have to make it the safest that they can? So one by one, colleges heard our story and started making changes. This year, my son’s school got on board with having every single bunk or loft fitted with a safety rail. That’s 8,565 beds on Tech’s campus alone! RAD is working to have the entire state system “rails on” by fall of 2019. Of course there are many other entities who use institutional bunk beds; prisons, camps, military barracks, etc. My ultimate goal is to get an institutional bed safety standard that will be international. It’s a big goal but I intend to see it through. I am working with the Consumer Product Safety Commission (CPSC) and other risk management organizations to come up with those standards and even legislate it nationally if necessary.

In the United States alone, it’s estimated that 450 people die after falling out of bed every year.

KR: We all have inner superpowers. What are some of yours?

MJ: My family always jokes that sarcasm is our superpower! But seriously, I think a good sense of humor can take you a long way. I am very determined (read:stubborn) when I know I am right about something and it is very difficult to shake me off of my task when I am motivated to get it done. I am a good networker. In my wonderful, huge circle of friends there are so many folks I can call on to help me get a leg up to the next level with RAD. I am also very confident in things I know I am gifted in. Being a very social person, I am not intimidated to take my case to anyone! Talking to the Governor or even the President of the United States wouldn’t make me nervous at all! I am excited to take RAD all the way until every bunk and loft bed has a rail on it, or at least until every one who sleeps in one knows WHY they SHOULD have a safety rail. The numbers are pretty grim people. Protect your kids.

KR: Can you tell us about an influential woman in your life and how she inspired you?

Clark spent his entire rehabilitation, 4-1/2 months of it in-patient, at the wonderful Shepherd Center in Atlanta. Alana Shepherd and her family founded Shepherd after a tragic accident left their son James paralyzed. He was in Rio de Janeiro with friends when he was thrown by a large wave into the shallows and instantly paralyzed. When they brought him home to Atlanta, they realized there was no place to do the kind of rehabilitation that James needed. So Alana and Harold got an idea to change all that. In 1975, the Shepherd Center opened as a 6-bed unit operating out of a leased space. Today it is a 162-bed hospital. The staff at Shepherd call her the “Mama on Fire” and her grit and determination gave me the courage to go for it with RAD. She told me to never take no for an answer and to knock on a lot of doors. I figured if Alana could change the world and fashion a top 10 rehabilitation center in Atlanta, maybe I could save a few lives, too.

KR: You put a lot of time into Rail Against the Danger, serving as the President and Founder, but I know you are an avid volunteer with other organizations. Where else do you volunteer?

MJ: I’m a peer visitor at the Shepherd Center three times a month. Two of those are with my son Clark who volunteers as a Traumatic Brain Injury (TBI) and stroke survivor and me as a caregiver. Once a month Clark and I lead a therapy group consisting of survivors of TBI. For Rail Against the Danger (RAD) I speak to various groups, including legislators to bring about change in perception and policy regarding safety rails on institutional beds. Clark and I also do campus visits, speaking to freshmen (mainly) about his accident and how easy it is to prevent injury with a safety rail. Our focus this year is on the Greek community to make them aware of our mission as it relates to sorority and fraternity houses. I’m also very active in the music ministry at my church where I assist in directing the Children’s Choir. I also sing in the adult choir.

KR: If you could have one super-human power, what would it be?

MJ: Definitely Time Travel. When I saw my son’s loft bed for the first time and how high it was off the ground, that little voice inside me said it was too high. But when I mentioned that it needed a bed rail, my husband, son, and daughter thought I was being over-protective and silly. Not wanting to be THAT mom in full-up helicopter mode, I relented. So, I would travel back in time to August of 2014 and insist that my son’s bed had a safety rail because the lack of it changed his life forever and almost took it. I guess that’s kind of a selfish superpower but that’s what I would choose.

Click HERE to learn more about Rail Against The Danger.